Lost Odyssey, or How I Learned to Stop Worrying and Love the JRPG.

Hey doods! So I'm pretty busy with work and school at the moment, and I'm having trouble with the Halo article I am attempting to write, so in order to buy myself some time, I'm posting this thing I wrote in my personal journal forever and a day ago about Lost Odyssey. Yes, a game that came out in 2007. I am relevant! It's rambly and pointless, but maybe slightly amusing, and that's all I ever hoped for in this blog anyway. So here goes.

I don't usually like Japanese style RPGs. I tried playing Final Fantasy (it was number six, I believe) and found it rather unimpressive. The story was mildly interesting, but I found the turn based combat and the random encounters so mind numbingly frustrating that I couldn't get very far in it. But Nova just bought Lost Odyssey, a game made by a large portion of the team that worked on the Final Fantasy games who have left Squeenix, and when I saw the trailer, I was intrigued. I mean, the damn thing is so freaking pretty. Check it.


Not to mention that the fact that they used White Rabbit by Jefferson Airplane makes the whole thing seem like some sort of extended acid induced trip, which I am totally down with.

So yesterday, I started playing at about three in the afternoon.

I did not stop till four in the morning.

I think it's safe to say I love this game. Love it.

Kaim Argonar, the main character, is a mercenary, about 1000 years old, has probably fathered enough offspring over the millennium to qualify as his own race, a total badass, and smoking hot.


At the beginning of the game, he doesn't know anything about his past, other than the fact that's he's a mercenary and he can't die. He doesn't want his memories back, because he knows they're all painful. Boy howdy, are they painful. Over the course of the game, Kaim's memories begin returning (in the form of artfully presented little stories), and it's a safe bet that each and every one of them is bittersweet, if not downright heart wrenching. This guy has watched a thousand years worth of loved ones and friends die. He's had dozens of wives and hundreds of children, all of whom he loved, all of whom are gone. He's seen civilizations rise and fall, fought with one country only to fight against them 100 years later, survived wars and famines and natural disasters while everyone around him died... He's like Tolkien's Elves on steroids.

So Kaim is currently fighting in a war with country A (who's name I forget) against country B (forgot their name too, though they're apparently dog people) when... oh here, I'll just show it to you.

This scene is the first one in the game, and it rules for several reasons.

1. Kaim flipping out like a ninja and killing shit. Who doesn't love that?
2. Giant spider legged magic robots who's entire purpose is to knock people over. Because they're wearing plate armor, see, and once they fall over, they ain't getting back up.
3. Speaking of armor, I like to imagine that this war (which we never learn the cause of) is really over which country has the right to claim the "most ridiculous helmet" award. I think the ones with the big rings win. Those things are just asking for the opposite side to build a giant magic "pick ring shaped things up and fling them" robot.
4. The sky just FUCKING OPENS UP AND RAINS LAVA AND ROCKS ON EVERYONE. It's the literal embodiment of "Rocks fall, everyone dies."

Kaim, thanks to that handy dandy immortality thing, survives this thing which no one has any right to survive. Throughout it all, he has this expression on his face of mild annoyance, like he missed the bus. It's great.

He's summoned before the counsel of dickwads that run the country who basically go "You can't die, huh? Cool, we're sending you on a mission that no one could survive." There's more to it, but this thing is already too long and I doubt anyone is still reading it. They pair him up with another immortal, Seth Balmore, an ex-pirate. 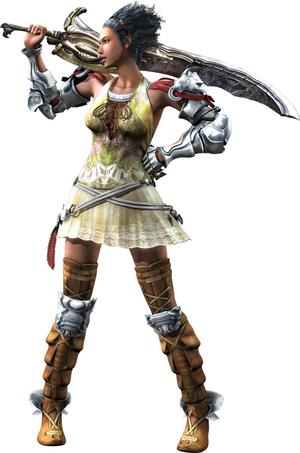 Can I just take the opportunity to say that I love anime armor? This makes so much sense. Knee high boots, huge hulking plate armor on the arms... and a pretty floral sun dress. With a feather! I guess she doesn't really need much armor since she can't die, but it's still kinda funny.

Also on the team is Jansen Friedh, who is the only mortal I have on the team so far, and probably the most genuinely hilarious character in a Japanese game I've ever seen. You know how, like, you're watching a anime or playing a game, and there's a character who you know is supposed to be the funny one, but all his jokes seem like they've lost something in translation? Most good animes get around that by having really good translators and voice actors and such, but a lot of video games, especially older ones, aren't really translated all that well, and the voice acting is often a bit ridiculous, and the humor takes a bit of a beating. Not so with Jansen. I want to find his voice actor and shake that man's hand.

This right here will tell you everything you need to know about Jansen.

There are so many situations with this guy where the fact that he's the only one in the team who can actually die make what they're doing really freaking funny. And his interactions with perpetual sad panda Kaim are classic. I love it.

Seriously, this game is just an interactive Anime with amazing visuals, a great story, and a big cast of characters that I just adore. Last night was the only time a video game has ever made me cry. Like, end of Deathly Hallows, gut wrenching sobs crying. And I'm not even done with the first disc, there are four in all. FOUR. DISCS. I can only imagine what the end'll do to me.

And for some reason, the turn based combat and random encounters don't really bother me in this one. There aren't nearly as many encounters, so you don't run out of healing potion simply trying to cross a room, and the battles are always entertaining. Truth be told I could just stare at this game for hours doing bugger all. It's just that pretty.

I guess what I'm trying to say is... I recommend this game. Yeah.
Posted by Starstuff and Iron at 5:42 PM 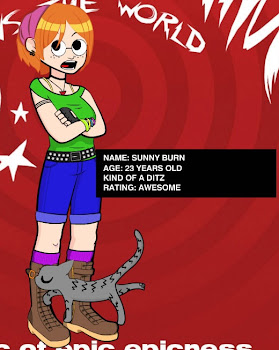 I totally look just like this. Thanks Scott Pilgrim!